This time last year, we tried out the RiutBag R25, which is still one of my go to bags and it still looks brand new! It’s extremely comfortable, durable and carries everything I need, it’s sometimes even too big! Perhaps that’s what fueled RiutBag to create this next evolution of bag, one that doesn’t always need to be ‘too big’. The X25 shares a lot of the same features as the R25 but it’s a had mini make over and is now expandable… you’ll see what I meant later on.

As mentioned above, a lot of existing features remain with the X25, including a 15″ laptop sleeve, zipped fabric & messed pockets and it can only be opened from the back. The ability to open the bag from the back, is one of the main features to RiutBag’s, as they increase the security level of your bag significantly. The main compartment and also a lower back zipped pocket, can only be opened by taking the bag off to reach round behind your back, which if you were a thief, would be very difficult to do unnoticed. I tried it on the original R25, I got a colleague to attempt to get into the bag while it was on me and every time, I caught him in the act. 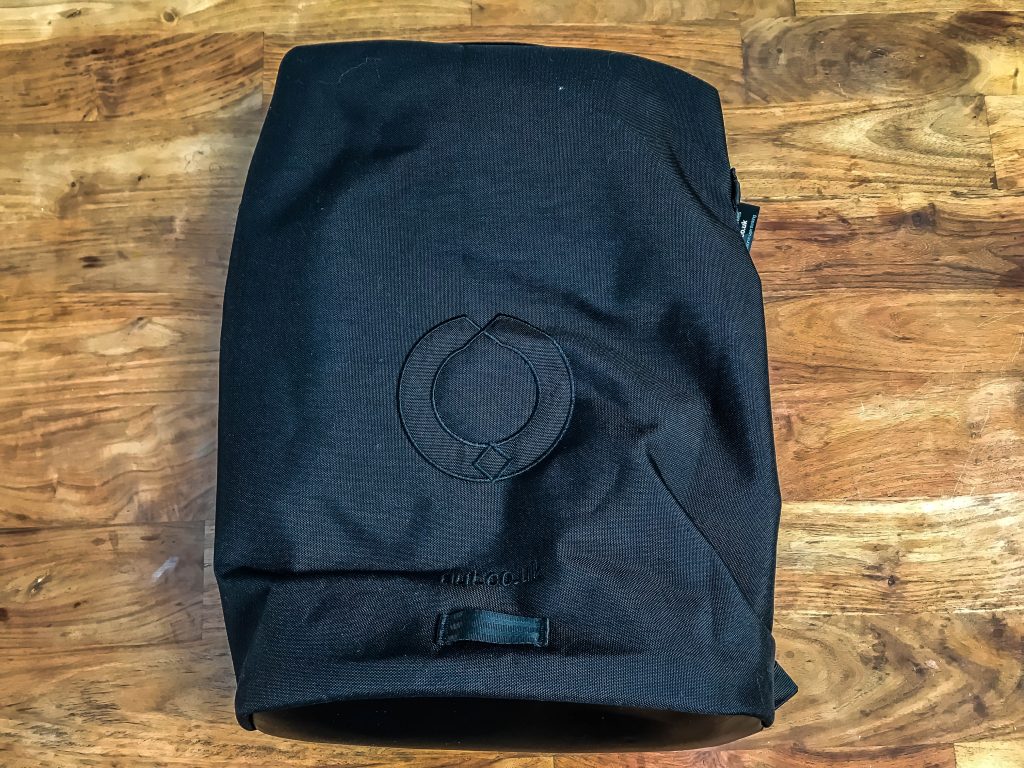 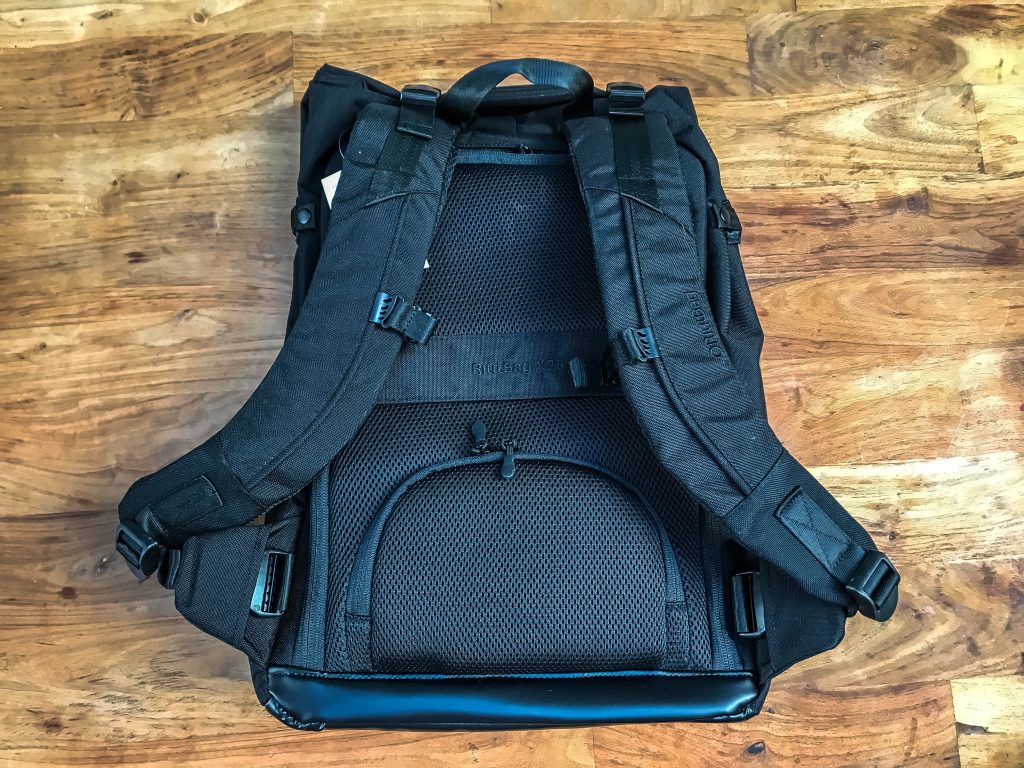 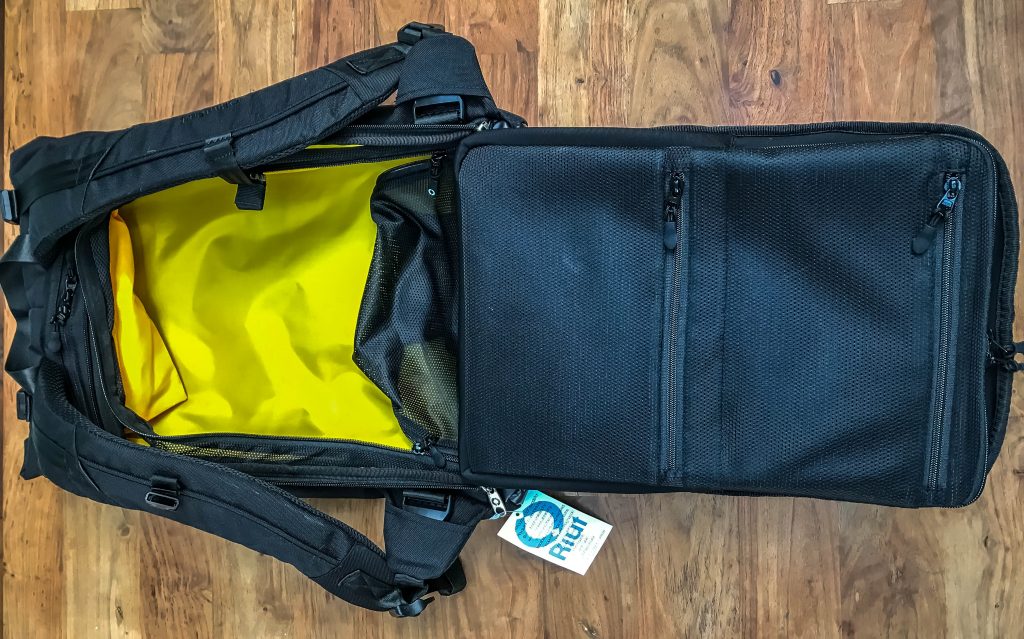 The X25 has had a bit of a make over, it’s still got the distinct RiutBag look, including the black fabric & bold logo on the front. To me, it looks a lot more subtle, with less curves & stitching, which I like. Number of pockets & locations are very similar, if not identical to the R25, which includes the main compartment & a lower back pocket & a high back pocket. The internal compartment is now finished with a vibrant yellow lining, which adds a bit of much needed colour to the bag. The bag is slightly smaller than its predecessor, but its only 5cm slimmer at the width. I was surprised to see that, as one of the first thoughts I had was “this seems smaller” and I guess that illusion is achieved with its newest feature…

The X25’s newest feature is that it is expandable, with RiutBag saying its two backpacks in one. By un-clipping the two clips at the top of the bag, it opens up some extra space, which allows you to add more contents into the main compartment. This is a very simple idea but a very handy one! Say for example you go away on a city break for a couple of days, expand the bag, fill it with clothes, empty said clothes when you arrive and then clip away the top section of the bag for a more compact day to day bag. When compacted, there is still a lot of space and you can still store your laptop in their too. It’s very easy to expand the bag, its just two clips (& two poppers) and the bags been designed in such a way, that when you fold it back, it creates a neat crease either side of the bag. 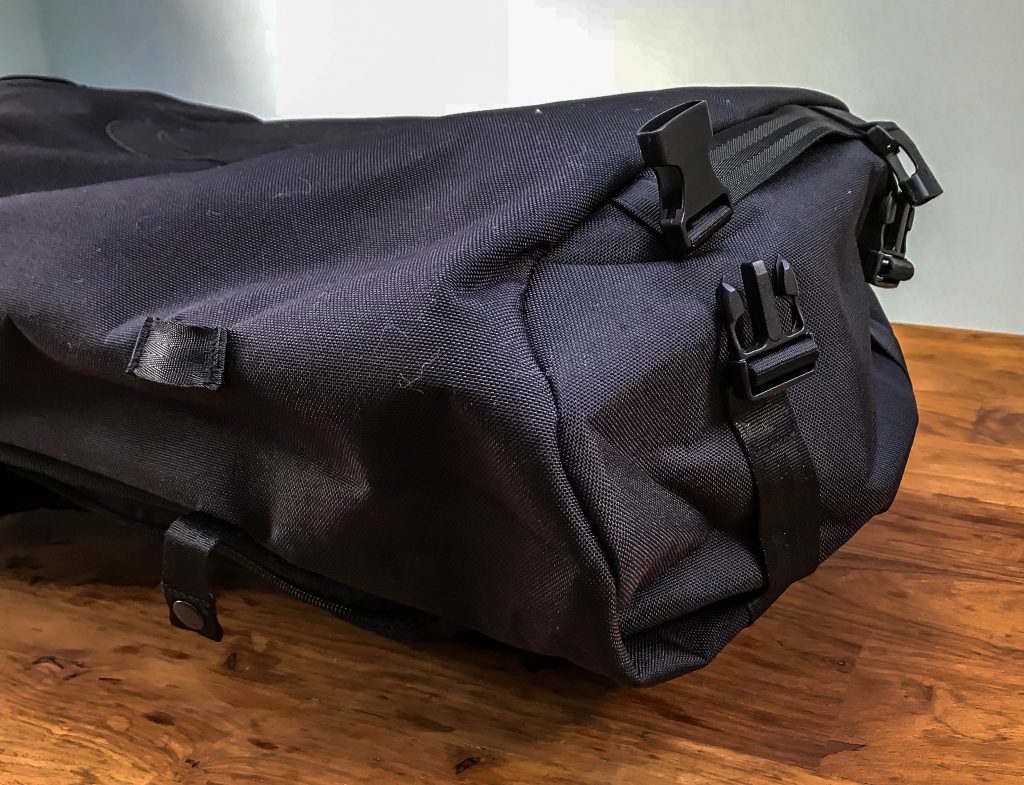 Like the R25, the bag is extremely well crafted, its very durable thanks to the materials used, including its rubber bottom. Its light in weight, its waterproof, the straps are very comfortable and there is also added support available at the chest & waist. What’s missing? The water bottle holders! There were two on the R25, now there isn’t even one. Also, unlike the R25, there are no smaller options available in the X range, at present.

The X25 currently retails at £149.99, so it isn’t cheap but you are paying for the quality and craftsmanship involved in such a good bag. I’ve been using the R25 for about a year, and it looks practically new, so your guaranteed longevity with RiutBag. For more info or to purchase, visit the official RiutBag website!