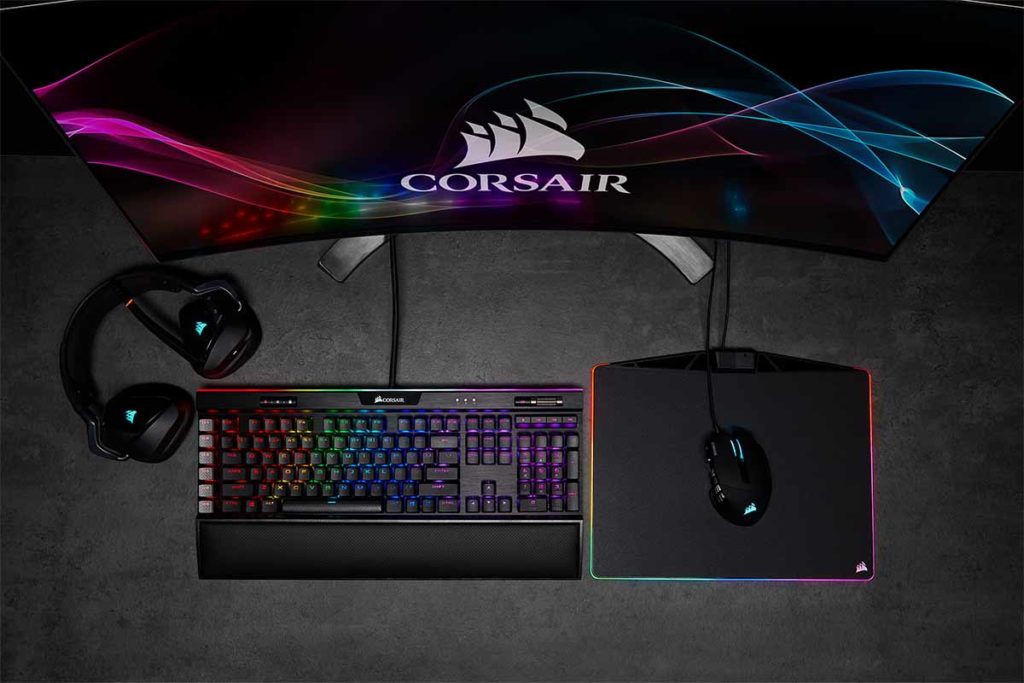 If you’ve been following us on our socials or watched a recent video, you will know Stef and I are at this years CES. We’ve just been to see Corsair and they have lots of new goodies for us to talk about.

We were firstly greeted by Corsair Concept Orion, which is a new concept case from the brand and includes 150 ultra bright, ultra efficient Corsair Capellix LEDS. The LED’s are fitted to tempered glass via ultra low visibility film and when we looked closely, it was incredibly easy to miss. The LED arrangement is fully compatible and customisable with Corsairs iCUE software. It looked absolutely amazing and definitely caters for a gamers growing need for more RGB. It is still a concept, still in development but keep an eye out for it in the near future.

Corsair had a few official releases and announcements with the first being the release of their new CPU air cooler, the A500. The A500 is able to cool CPUs up to 250W TDP and it is equipped with four direct-contact heat pipes and two CORSAIR ML120 magnetic levitation bearing fans, controllable via PWM for precise adjustment of fan speeds between 400 RPM and 2,400 RPM. The fans sit within a ratcheting slide-and-lock fan mount, allowing for a variable fan height to accommodate a wide range of DRAM. The A500 is easy to install and stays firmly in place thanks to the CORSAIR HoldFast retention system, and is compatible with AM4, AM3, FM2, LGA115x, and LGA20xx CPUs. Hands on with it and it was lighter than expected, comes pre installed with paste and the fans were a breeze to take on and off. It is available next week in at least the UK and US for 85 british pounds or 99 dollars.

Next up we have the K95 RGB Platinum XT mechanical keyboard, available with cherry, brown or blue switches. The K95 includes dynamic per key RGB backlighting, allowing near limitless customization. It also includes PBT double shot keycaps, six dedicated macro keys which can be programmed alongside your Elgato stream desk software and the overall built quality and attention to detail was superb.

We also checked out the Corsair iCUE software with the the K95 keyboard and a number of their other products, all of which can be perfectly coordinated together to offer the ultimate look.

There were also a couple of updates from Elgato, including a new capture card, the 4K60 S+. Which is Elgato’s most powerful external capture device yet and includes everything the original 4K60 did, but it allows you to record gameplay directly to an SD card without the need for a connected computer. This makes it easier than ever to save and transfers your recordings.

Elgato also have their new Key Light Air, which offers the same powerful customizable LED studio lighting in a compact form factor that fits effortlessly into any setup. Equipped with 80 premium OSRAM LEDs and multi-layer diffusion technology, the edgelit LED panel outputs 1,400 lumens and a wide range of warm to cold color temperatures between 2,900-7,000K. A free app available on iOS, Android, Windows, and Mac enables wireless control of Key Light Air, making it easy to turn on/off, dim, and adjust on the fly.

Next we found out that Corsair actually acquired Scuf Gaming just a few weeks ago. This now means Corsair can offer console gamers top level controllers, used by the pros at international competitions. There is no suggestion the Scuff name or branding will disappear just yet.

Lastly, Corsair showcased the ultimate gaming machine they have developed with Origin PC. The Origin PC Big O features a high end gaming pc and an Xbox One S or PS4 Pro in one compact box. They are not cheap but they do look awesome and we all know that PC gamers also have a console too, just in case.