AOC who are generally known for their budget friendly desktop displays have started to dip their toe into the wonderful world of gaming, and have bought a range of gaming monitors to the market. The AOC G2590VXQ is a 24.9″ display that boasts everything you would want from a gaming monitor like a 1ms response time and a 75Hz refresh rate, but the TN technology behind it unfortunately turned this monitor into a bit of a one trick pony.

TN technology is generally used in budget friendly monitors, but can also be preferred inside gaming screens. TN technology can produce faster response times, and can be a lot brighter than traditional IPS display meaning things can be a lot clearer on screen. However, IPS monitors can produce a lot better, more realistic colours, and have wider viewing angles, which make them great for things other than gaming. Although saying that, if this monitor is purely for gaming, then it’s a cracking bargain.

So, taking a look at the actual monitor aesthetics I must say it is a rather clean design. AOC are calling their panel a “3-sided frameless design” which puts the red strip at the bottom as the fourth bezel. The screen is incredibly thin, and thanks to a small disk shaped stand, takes up very little real estate on your desk.

On the back you will find the kettle plug input for power, as well as two HDMI ports for two separate sources – PC and Xbox for example – and a Display Port. All cables plugged into the monitor can trail through the hole in the back of the stand to get that neat looking cable run. There is also a VGA and 3.5mm auxiliary jack for sound, but who uses those now-a-days right?

All of the monitor’s features are controlled using the analogue stick that’s positioned at the bottom right of the screen, making it easy to flick through the various menu systems that this monitor has to offer. Most controls you would expect from a monitor like brightness, contrast and sharpness are all here, with the addition of gaming profiles too. There are preset modes for first person shooters, racing and even real time strategy games, and you have the chance to customise your own gaming profiles too, of which there are three.

I typically found myself leaving the settings on the FPS mode, as that seemed to offer the best colour (albeit a little on the blue side, and very saturated) and best shadow control, which is AOC’s way of controlling how much detail will shine through in darker areas of a game. You can see real life examples on the AOC website if you wish.

One thing the monitor does come with is Freesync, which improves responsiveness for those with supported AMD GPUs. The monitor is able to synchronise the frame rate of the GPU to the refresh rate of the monitor, as long as it’s sitting in its specified range. Unfortunately, this only works for people with AMD graphics cards, so you Radeon people out there will be fine. However, for us nVidia lot, we’re stuck with the standard 75Hz refresh rate.

I’m not complaining though. Even though I still run a GeForce 980TI in my gaming machine (damn Bitcoin miners making new cards expensive), there wasn’t any noticeable input lag, even when playing fast paced games like Doom. The 1ms pixel response time still made the game look super smooth, and minimised the amount of ghosting that was thrown out by fast movements. When switching over to Sea of Thieves which is a lot more calm, the only thing I did miss, as I am by no means a competitive gamer, is the colour reproduction. Everything just looked a little flat. Blacks are nowhere near as deep as I have found on IPS panels.

But at the end of the day, this panel is aimed at those hardcore gamers among us, the people who rely on the smallest of pixels to grab a headshot from across the map. I’m looking at people who like Counter-Strike: Global Offensive or even Overwatch, where every pixel counts. These people probably aren’t worrying about how colourful their picture looks, as headshots and KD ratios take priority. For people like that, the AOC G2590VXQ Gaming Monitor is probably a decent choice for budget conscious minds. For everyone else, or those looking to do some kind of video or photo editing work, look elsewhere. 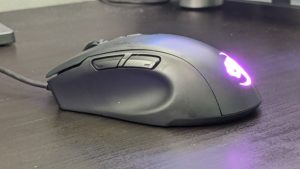